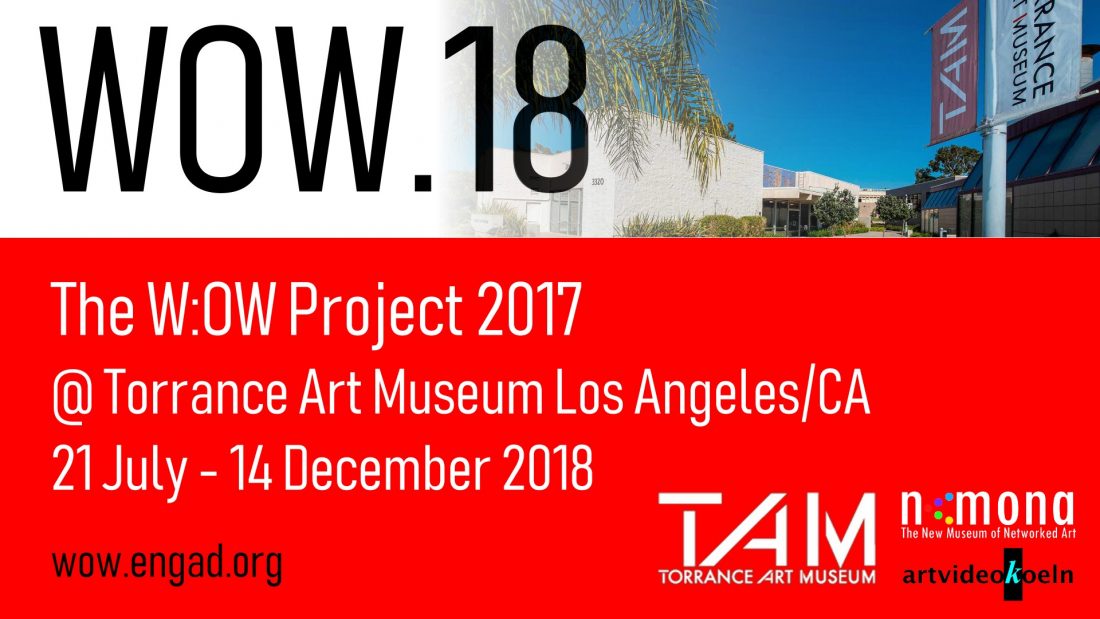 We are happy to announce that ADAF is part of The.WOW.Project 2017 – screening series TAM Torrance Art Museum Los Angels/CA

A diversity of artistic and curatorial concepts, as well as a variety of topics affecting human individuals wherever they live on the globe.

WOW.18 / USA is the 18th and so far most comprehensive manifestation of „The W:OW Project – We Are One World” and the 1st one in USA @ Torrance Art Museum.

Running between 21 July and 14 December 2018 @ TAM, the screening program series of „The W:OW Art Film & Video Festival” are presenting the entire artvideo program as it was presented at 10 the venues in 2017 including more than 125 art films & videos by 125 artists from about 30 countries selected by 10 guest curators from Mexico, Greece, Spain, Portugal, Bulgaria, Italy, Israel, Austria & Russia and the German Wilfried Agricola de Cologne as a chief curator and director of „The W:OW Project” – packed into 20 curated, conceptual programs.

According to its concept of and reflecting the diversity of life, in general, and human existence, in particular, „The W:OW Project” program would like to present a diversity of artistic and curatorial concepts, as well as a variety of topics affecting human individuals wherever they live on the globe. The project is using the technology of video and the medium of „moving images” as a contemporary audio-visual language of art, addressed to an open-minded audience who is eager to learn new ways of viewing following the new rules of „artvideo”, differently than the mass of static and moving images overwhelming people in daily life permanently like in cinema, television or Internet – giving the individual image or „frame” back its individuality, and time another relevance and perception.