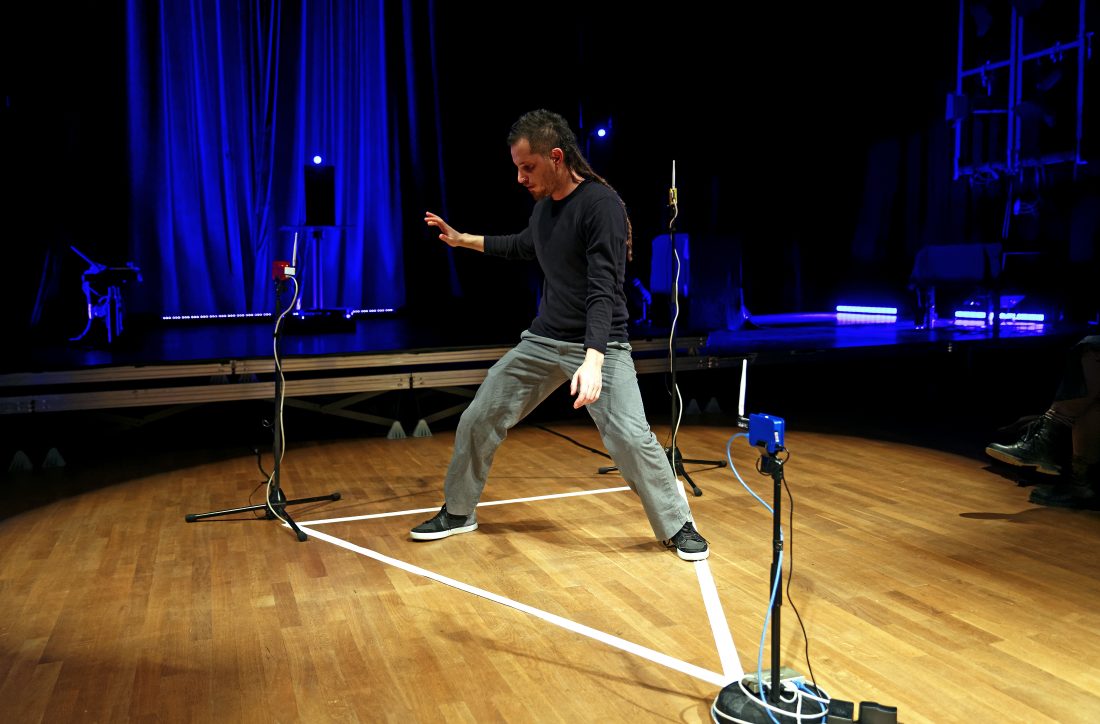 In 1886, Heinrich Hertz created an apparatus that could sense and generate electromagnetic waves, thus expanding the strata of known physical reality. Today, the Earth’s atmosphere has an electromagnetic double: a layer of radio waves that keeps our world running, engulfing us in turbulent streams of energy. Beyond merely distributing our data, the Infosphere has a side effect: it transmits information about physical space and our bodies within it. Our data networks are public radars, lending a radio ear to anyone listening. Hertzian Field #2 is an augmented reality immersive sound and movement solo performance, revealing the invisible flows of wireless communication and their interaction with the human body. It uses a new sensing technique developed by the artist, inspired by obscure surveillance research and radio astronomy. The system creates sound by analyzing the interference of the body in the electromagnetic fields of WiFi networks.

With thanks to Stroom Den Haag

Stelios Manousakis is a Netherlands-based artist from Chania, and the founding co-director and curator of the intermedial Modern Body Festival in The Hague. His work explores relationships between time, space, body, system, and sound; it is particularly concerned with the invisible and the ephemeral, and with shaping sensation, perception and experience in time. His practice lies in the convergence zones of art, philosophy, science, and engineering; it extends from performances, to environments and interactive installations, to compositions, fixed media pieces, and film music, and often merges algorithmic finesse with the expressiveness of improvisation or the immediacy of audience participation. Stelios’ work has been shown across Europe, the Americas, and the Middle East in festivals, performance venues, centers, museums, galleries, and underground spaces, such as ZKM, dOCUMENTA, IDFA, Seattle Art Museum, Rewire Festival, AudioArt Festival, ICMC, NIME, Orgelpark, IEM Graz, Museum of Contemporary Art Vigo, Contemporanea New Music Festival.