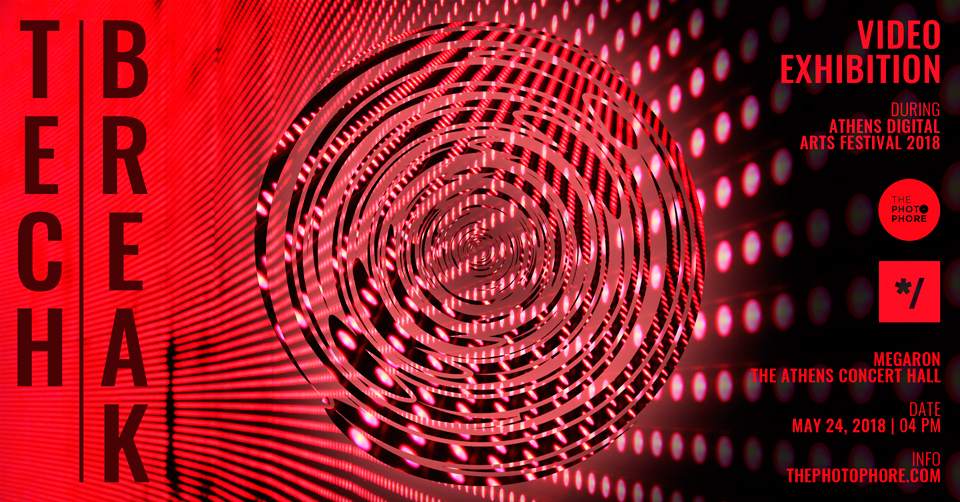 The Tech Break is a singularity in the evolution process of humankind. It’s the point in which something different and unexpected happens and changes the order of things.

Will a superior artificial intelligence, that surpasses the man, be created? Will this intelligence be autonomous and developing without the man? Will we create a new organism that can control the universe?

Or, will the Tech Break be the moment when the Universe rejects the human technology, bringing us back to a new Stone Age?

Will it be a moment of sudden and unmanageable development or the breaking point with an unsustainable way to be human?

Would we need to take a break after the Tech Break?

Manusamo & Bzika (ES) | Mars Egg Oddysey (2018) | 02:02 min
Mars Egg Odyssey presents a portrait of the cataclysm where the human race depends on the new forms of planetary colonization. In this possible future, humans are forced to explore outer space through devices based on an oval shape, which are composed of an amniotic gas that not only allows the transport of new societies but also proposes a new form of human gestation. The birth of humans in an inhospitable environment depends completely on technological mediation and the relationship between the biological and technological becomes a form of a crucial symbiosis.

Antonello Matarazzo (IT) | POLITIK (2017) | 02:08 min
101 dead insects between immobility and transformation. The polis of insects in an interconnected world before the internet.

Dawn George (CA) | We R the World/Mold (2016) | 06:45min
Up close, mold is an intricate mass of branching filaments and delicate fruiting bodies which create a colourful connected web.  When viewed from a distance, mold loses its complexities and a more destructive nature is realized.

Ran Slavin (IL) | Ursulimum (2012) | 16:34 min
Ursulimum is the first reference to Jerusalem in ancient Egyptian records dating back to 1330 BCE. Ran Slavin’s “Ursulimum” is an underground odyssey in a deep maze under Jerusalem. In this odyssey, we face endless empty halls and rooms, magnetic force fields, glittering pantheons and an abandoned technological site radiating self-replication. We walk through a newly discovered past into a futuristic location, exploring a place, history, memory and fantasy.

Konstantina Papadopoulou (GR) | iCon (2017) | 17:31 min
In a society where smart apps dominate, a man chooses an environment away from the comforts that high technology offers and tries to face a powerful opponent, using only his own strength. In the not too distant future, people continue their quest for prosperity, developing a series of high-tech applications in order to make their everyday lives better. Orpheus, seeking his own Eden, withdraws from this everyday life and faces a strong opponent. With his strength as his only weapon, he pushes his limits.

The PhotoPhore is a platform about contemporary art, photography and architecture. It curates high-quality contents, dedicating its attention to projects characterized by great visual impact and distinctive concepts. The PhotoPhore strongly believes in art and culture sharing and it’s always open to start a dialogue and build partnerships with art festivals, galleries and contests.

Our mission is to design, create, manage and communicate art exhibitions, screenings and cultural events.